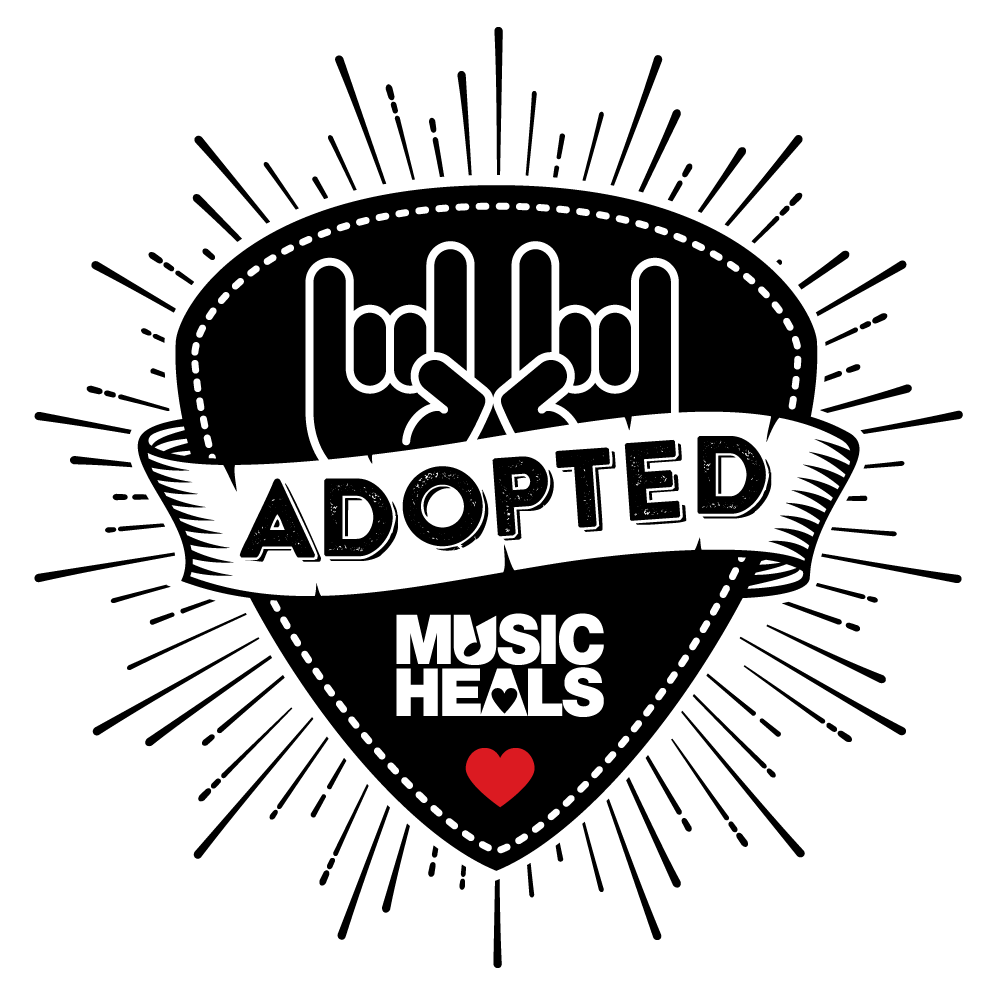 Adopted by
The Meehan Family 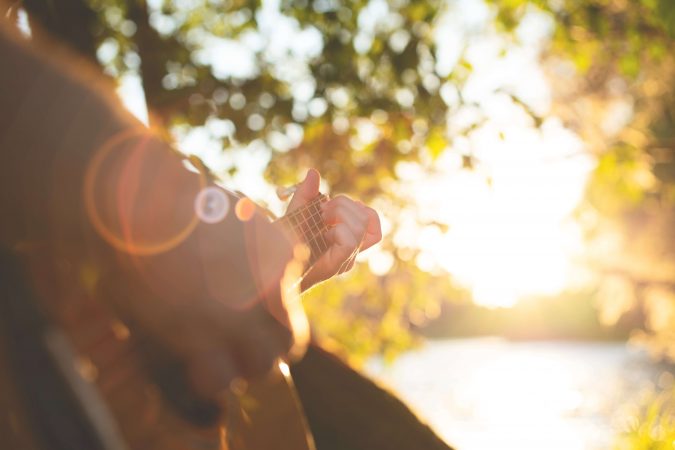 “We were all struggling so much with our mom’s sudden decline.
[Music Therapist] Josh’s music helped fill the space when we were lost for words”

The music therapy program was reintroduced at the Vancouver Hospice Society in 2020 and the timing couldn’t have been better. With COVID-19 impacting everyone, connection and continuing to create memories right up until the end of life became just a little harder. Having [Music Therapist] Josh providing music therapy was such a joy for patients and their families. Josh was able to be with people who were separated from family who couldn’t travel. When they were able to be together, he sat with the families and sang songs with them sharing memories of the past and enjoying the moment they were in. He supported the staff as well, ‘just hearing him play and music floating down the hall, or playing in our lounge for everyone to hear provided a real therapy for all of us”. The central gift of the music therapy program is the time that Josh spends in each patient’s room talking, singing, and remaining present. People look forward to when Josh is at the hospice each week and adds so much to their quality of life.
The hospice supports around 130 patients a year and Josh is able to provide 6 sessions a week equaling approximately 312 sessions in total.

Vancouver Hospice Society is an 8 bed inpatient hospice that supports approximately 150 patient’s, plus family and friends annually. People stay at the hospice at the end of life and are there for 3 months or less. The average length of stay is 2-3 weeks. Vancouver Hospice supports people who are living with a life threatening illness.

This year, in addition to the impact of the pandemic, the layer of added grief that often accompanied loss was tremendous. Music Therapy was something the hospice was able to offer that provided solace for patients. Many people didn’t have as many family and friends visit and that created some loneliness [that] Josh was able to support people with. It was also a difficult year for the staff and the added benefit of music therapy was helpful for the clinical team’s mental health as well.

With proper PPE and health protocols in place, the hospice has been fortunate that music therapy has continued throughout the pandemic without interruption.

Adopting this program will ensure the continuation of Music Therapy at the Vancouver Hospice Society. Currently music therapy is provided 6 hours a week over 2 days and Music Therapist Josh sees as many hospice patients as he can during that time. The hospice has 8 beds and an over 90% occupancy rate. Josh connects with each patient and family as they are admitted to assess if they would like to have music therapy. The hospice is hoping to develop some new counselor-led support groups that include music therapy to further increase the quality of life for patients at the end of life. 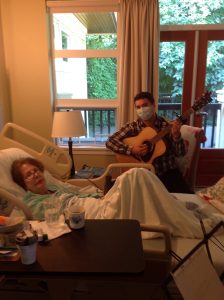 SP was admitted to Vancouver Hospice with a diagnosis of hepatocellular cancer. She was noted as a possible candidate for music therapy, as Music Therapist Josh had briefly worked with her during her stay at a St Paul’s Hospital. When they met again at the hospice, it was a surprise to SP, who exclaimed with a big smile “Oh! it’s you!”.

SP had an eclectic musical taste, ranging from The Beatles and Simon & Garfunkel, to 90s Brit pop bands like Pulp. She was briefly a musician back in her younger days. One day at the end of one of her weekly sessions, she proclaimed “We hit the whole gamut today – we’re playing all these great songs l’d forgot about!”. Not only did S have a musical background, but she also had a keen sense of humour- during one session she suggested that Josh “enunciate more”, joking that his mask was washing out his consonants.

When asked about her experience with music therapy at the hospice, S kept it simple and direct: “I like [music] because it’s a universal language. It lightens things up, brings back positive memories, and can be good mental exercise”. One of SP’s favourite songs was “And I Love Her” by The Beatles because it moved her and held a lot of meaningful memories. For SP, music therapy was able to remind her of the good times and brought a lightness and joy to her last days. 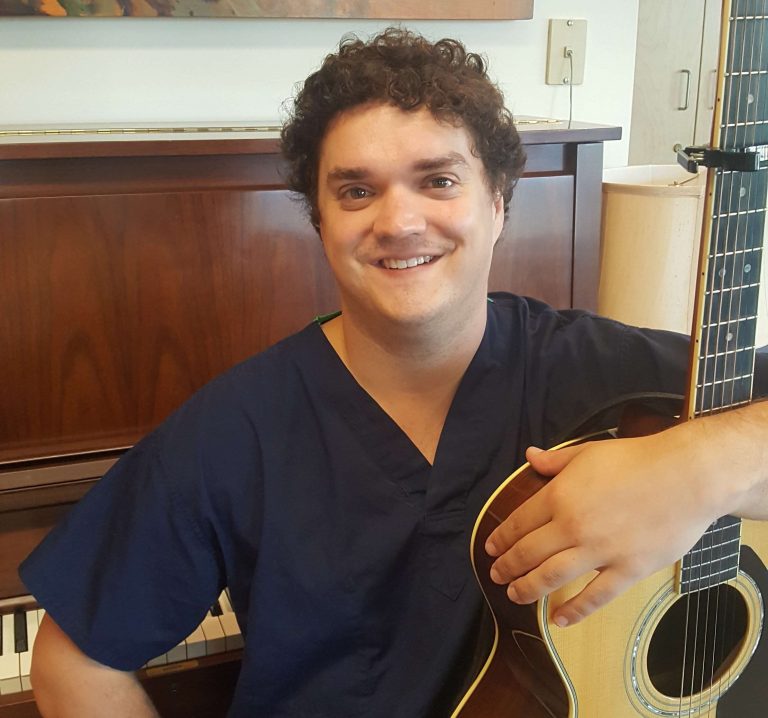 My name is Joshua Denny-Keys and I have been employed as a music therapist at Providence Health Care since March 2017, the Dr. Peter Centre since November 2017, and more recently with Vancouver Hospice Society. I have worked with a variety of populations, from acute mental health and long-term care, to palliative care (both acute and hospice) and HIV/AIDS care. I focus on patient choice in my work, meeting those I work with where they are at, and then building goals and the therapeutic relationship from there. I am an accomplished pianist, guitarist, and French Horn player – as well as a mix of other instruments including banjo, trumpet, and more.