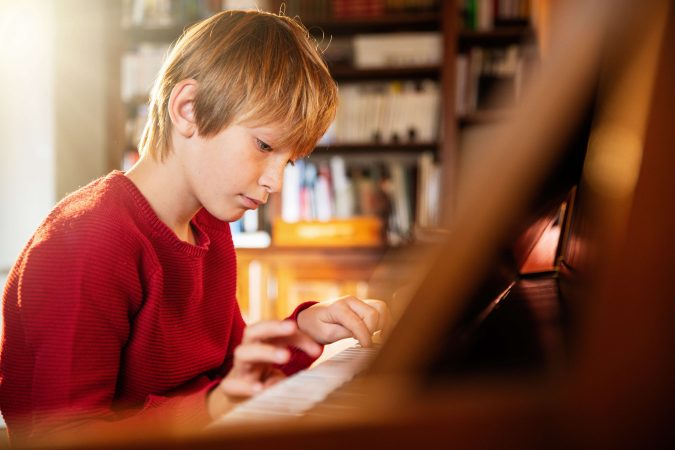 My daughter has a mood disorder and has been unable to participate fully in regular classes and regular music class for a while. It’s [music therapy] a great outlet for her because she enjoys music so much. It is also catered to her own abilities and interests, which she also enjoys. It’s been so nice to see her enjoy music again.”

Children/Youth currently referred to music therapy service have experienced trauma and have complex needs. Most of these children/youth have behavioral challenges that are destructive either to themselves or towards others. Some of these underlying issues are trauma, abuse, neglect or signs of mental health conditions.

How does Music Therapy uniquely address the needs of clients at Surrey School District?

Over the last two years, students ranging in age from 6 to 15, who access the Cre8: Wellness through the Arts music therapy sessions have been able to explore their thoughts, and feelings and emotions in calm and non-threatening environments. Most of the music therapy sessions have been done with elementary age students on a 1:1 basis with some small group work during the school year. Small music therapy group sessions were also provided for our most vulnerable students elementary and high school age, many of whom have Ministry of Children Family and Development (MCFD), psychiatrists and clinician involvement in their lives. Through the therapeutic intervention of music, we have seen an increase in communication, socialization and memory in many of the children which has encouraged positive changes. The impact of trauma on the children’s development is further reduced by teaching social and emotional skills which tie into the BC curriculum and the Social and Emotional Learning Core Competencies.

How has COVID-19 impacted the program?

The Cre:8 Music Therapy program was suspended for two weeks due to school closure in March/April 2020. All 1:1 in-person therapy sessions were switched to on-line therapy sessions. Some students found it very supportive to be connected and receive much needed supports, while other students were unable to attend weekly session due to lack of commitment from their caregivers. Covid-19 has created a huge impact on the music therapy services and connecting with students and their families regularly has become a challenging task.

This funding would add an additional day per week to music therapy services for the year 2021. The school district’s aim is to create more service hours to tailor different needs for their students. This means creating more in-person (when able to), virtual and possibly “mobile” therapy to meet students where they are at. They are also planning to expand music therapy services to further support their high school students’ mental health well-being.

Peter, an 11-year-old student composed this song in one of our very last in-person sessions before the Covid-19 pandemic began. It was not planned, it was not edited, but it was personal and filled
with creativity.

Peter had a rough early childhood due to unpredictable living conditions in which he witnessed violent acts. He was diagnosed with various mental health issues due to these early childhood
traumas. According to Peters’ teacher, his ‘file’ was not a simple 2-inch binder but something a lot more complex. Peter was referred to the music therapy programme because of his unpredictable behaviour and boundary issues. Often, he found school extremely challenging and was not able to maintain basic academic requirements. In school, he struggled to develop a positive connection with his peers and teachers, and often felt like an outcast. However, his musical creativity was recognized by his teachers and a referral was made to support his personal growth within our school system.

Overwhelmed by the big big world

Peter demonstrated his musical creativity early on during our music therapy sessions. He could make up songs on the spot and was not hesitant to express his disappointment towards the world,
education and people. He often talks about “heavy” topics such as gun violence, world corruption, and education failures. Peter had so many concerns and worries that he wasn’t able to shut them
off in his head. As Peter’s therapist, I felt he needed a place to share his overwhelming inner world, and our sessions became a place for him to express his inner chaos. Peter sang about education that resembled Pink Floyd’s “Another brick in the wall”, he sang about protecting our environment for future generations. Later, he started singing about his own weaknesses and vulnerabilities.

As we continued our weekly music therapy sessions, Peter started to sing about his weaknesses and his relationship with his family and friends. He sang about his minimal academic skills and different relationship dynamics between his friends and family. Peter also talked about how “different” he feels from others. In one of his sessions, he said “Everyone thinks I am insane…….but that’s ok”. He recognized his weaknesses but at the same time, he also started to recognize his areas of strength as we explore through our music-making and conversation.

After five months of our weekly music therapy sessions, Peter started to explore different ways to express himself. He danced, played musical instruments, talked and created music using Garage
Band. His musical composition started to transition from “sad” and “dark” to a mixture of “humour”, “play”, and “self-reflection”. Our sessions became something Peter looked forward to and a place where he felt “proud” of his works. Most of all, it became a place where he could “have fun for once and fly away without expectation~”.

Emily Teng has been working as an accredited music therapist for the past 15 years. Currently, she is working as a music therapist at Surrey School District and an instructor at Capilano University. She obtained her masters’ degree from Nordoff-Robbins Music Therapy Centre and her bachelors’ of music from University of British Columbia.