When a premature baby spends time in our NICU, it can be a heart-wrenching experience for their caregivers. The music therapy program provides caregivers with an outlet to experience joy and develop precious bonds with their new baby that will last a lifetime. Thank you sincerely to Music Heals for bringing the gift of music to families in our NICU.”

Royal Columbian Hospital (RCH) is a regional referral facility for neonatal intensive care that serves the entire Fraser Health region – from Burnaby to Boston Bar. Typically, 800 premature babies are cared for on an annual basis. Since 1997, the Canadian Neonatal Network has recognized RCH’s Variety NICU as consistently ranking among the top in the country for achieving excellent survival rates for babies who are born before their due date and very low rates of complications related to prematurity. Of course, premature babies require comprehensive care, especially in their early weeks of life. In 2019, a music therapy program was initiated in the Neonatal Intensive Care Unit (NICU) at Royal Columbian Hospital (RCH) with the support of Music Heals Charitable Foundation. This added another important tool to support their growth, development and healing – while helping to establish bonds with their caregivers. Twice a week, music therapist Katherine Deane provides one-to-one sessions with premature infants and their caregivers in our NICU. While these babies are medically stable, they can be as young as 28 weeks gestational age.

Music therapy sessions can be offered while the infant is laying in their isolette or cot, having a gavage feed or a cuddle with a nurse or parent, or while the patient is dozy on the parent’s chest during kangaroo care.

In addition to offering these customized sessions, the music therapist also checks in regularly with families in the NICU to determine if they have been able to utilize music with their infant on their own, and how the music therapist can continue to support their experience while their child remains in the NICU. The music therapist also provides handouts detailing the parameters of music therapy in a neonatal setting, as well as information regarding newborn music cognition, as well as additional take-home information which outlines how music can support their infant’s development through early childhood.

Depending on the nature of the care required, premature infants and their caregivers may be transferred to RCH from other parts of the province. Overall, the population served by RCH is one of the more diverse in the country, with 41% visible minorities, and 34.9% newcomers to Canada.

Given the vast area served by the Fraser Health region, there is significant representation from a number of ethnic communities, which includes Indigenous Peoples and individuals of Asian & South Asian descent. Given this, the music therapist has taken steps to ensure that 1:1 sessions are inclusive and culturally sensitive.

Throughout the COVID-19 pandemic, essential visitor protocols have been in place at all healthcare facilities. This has meant that only one caregiver may visit the NICU. This has been particularly challenging for spouses & partners, as they had to shoulder a very stressful situation alone. When the music therapist provided music therapy sessions in the NICU, it gave caregivers the opportunity to talk about their experience, while offering musical relaxation with their infant. Overall, music therapy provided a calming presence in the NICU during a heightened time of stress for RCH’s clinicians, frontline healthcare providers and support staff. It was a very welcome release.

The hospital was able to continue offering in-person music therapy (with protocols in place) throughout the pandemic; 1:1 sessions were not interrupted. However, as only one caregiver is allowed to visit at a time, family sessions (which typically include both caregivers, a grandparent and/ or an older sibling) are not currently possible.

255 premature infants & their caregivers received a total of 750 sessions in 2021. Music therapy was offered twice per week (five hours per session) in the NICU.

Adopting this program would mean the continuation of one-to-one music therapy sessions as well as Zoom sessions after the children return home with their caregivers.

A few examples of music therapy in action at RCH NICU from Music Therapist Katherine:

“As a music therapist, I’ve seen parents put down their phones during skin to skin contact and gently stroke their baby’s head or back and relax back themselves during music therapy. I’ve also heard parents singing along to their infants during music therapy and letting me know that they have taken the time to sing to their infants when I’m not there. I’ve also been able to soothe fussy infants when parents aren’t on site and supported them to calm to a more relaxed state or help them settle back to sleep.”

“I worked with a mother whose infant was a ‘long-stay’ patient in the NICU. The mother confided in me about her loneliness during this period, and how challenging this was for her emotionally.”

“One family I worked with shared a family song that grandma sang to all of her grandchildren at home – and I sang this song with the family. When they returned home, they sent me a video of grandma singing this song to their baby once he arrived home. It reminded me of how music plays such a fundamental role in so many families, even when they are apart.” 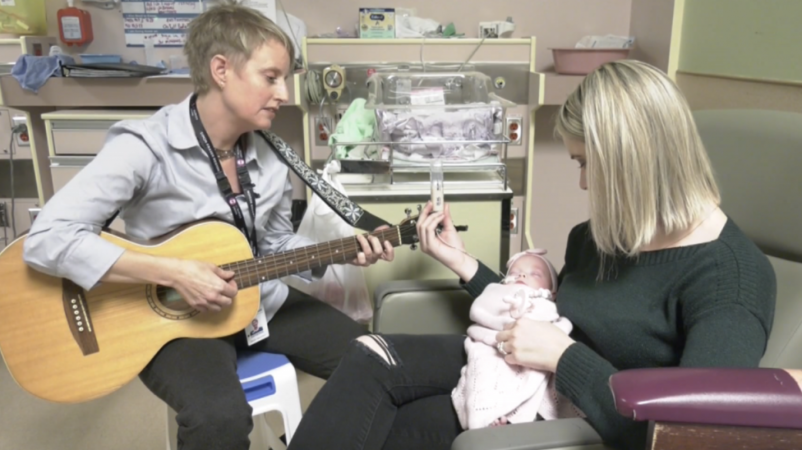 “I have been working as a NICU Music Therapist at the Royal Columbian Hospital NICU since the Spring 2019. In that time, I have had the privilege to work directly with patients with following objectives in mind: settling infants to a deeper sleep, soothing during times of digestive discomfort, assisting with pain management during blood work, and providing opportunities for cognitive development. I have also worked with parents and caregivers at the bedside to facilitate parent-infant bonding, increase parental confidence, create and modify songs of kin that are meaningful to the family, promote relaxation, and provide emotional support when needed. It has been a deeply rewarding experience to empower parents to sing with their infants and to sing with their children when they are not able to be at their side.”