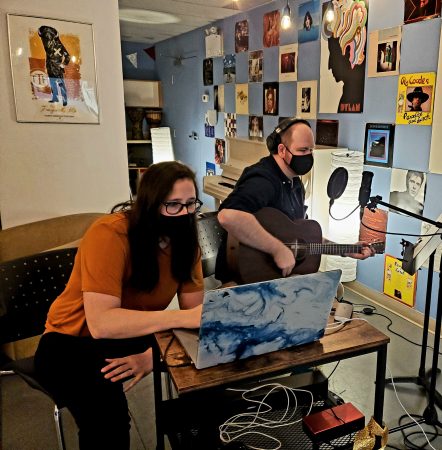 “Eclectic Album showcases songs recorded by Surrey residents in recovery” is not just a powerful story title published in the North Delta Reporter and Surrey Now-Leader. It is a project called “Hear Our Voices” that Certified Music Therapist Felicia Wall initiated to help residents at Phoenix Society explore their recovery through music.

The experience of going through addiction and mental health is often not told from their perspective, so Felicia and music therapy intern Ian Fildes helped their experiences come to life. The album consists of something for everyone – including original songs, covers, country, rap, and poetry.

Through the process, the music therapists witnessed the residents gain confidence and self-esteem, going from a place of hopelessness to arriving in a place of hopefulness.

But there’s so much more to music therapy than people know, and we are grateful to Felicia and Ian for letting us into their world! 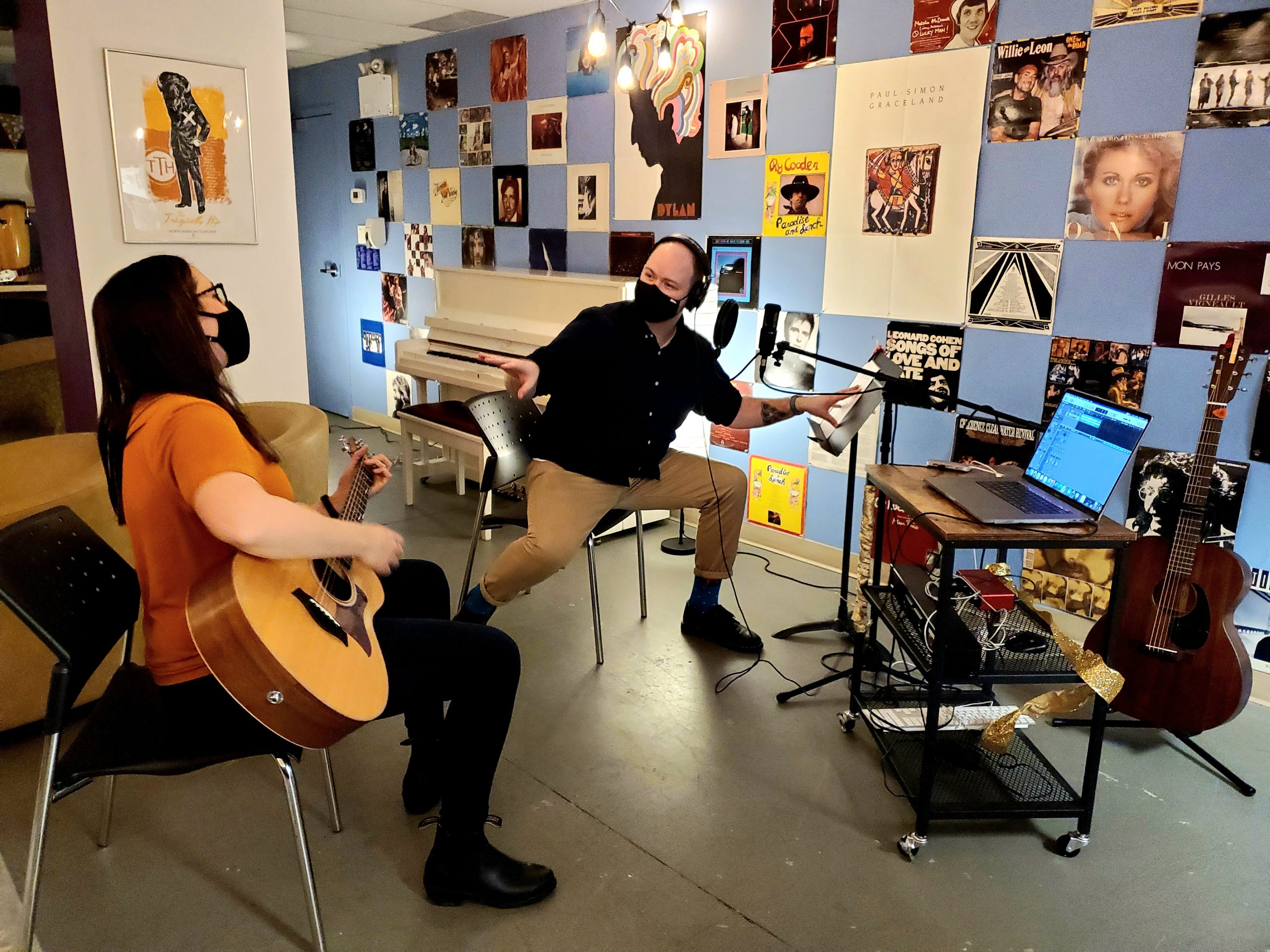 At Phoenix Society, how did you make the ‘Hear Our Voices’ project happen?

Felicia Wall: The way that Phoenix works is that residents come in for treatment for 90 days, sometimes longer. And then if they if there’s enough spots, they go into a transitional housing suite that’s on premises. So, they’re still very, very much involved with the community here. They just don’t necessarily go to treatment groups every day. So, I work with everyone that comes to the program. I know basically all of the musical people in the community. I would just go up to them, tell them what we’re doing and get whoever wanted to involved.

Ian Fildes: When I came in September, that’s when I started my internship hours. In my third week, Felicia asked me to start doing a little bit of soundscape behind a couple of the poems that are on the album, and this sort of stuff, and realizing how much truly was to be done and how big of a project and how what level of excellence that was being striven for it. I listen back to it now, and I’m so surprised and so proud of how it sounds and how professional it sounds. I think that I’m very proud of the fact that I was able to be a part of it.

I worked on it for four months with Felicia here, and just seeing how much growth and how much acceptance of themselves and their own voices and their own sound that came from doing a project like this was, it was just incredible to see.

Aside from Phoenix Society, where else do you have Music Therapy programs?

FW: I have another Music Heals grant at an alternative school I work at called Royal Oak in the Burnaby School District. I’m mostly working one-on-one or with about two people at a time because the schools I work at are quite a bit smaller. It’s so great, because all the kids have had such incredibly hard lives, and not much positive adult interactions.

Sitting down with these kids, they’re so open and it’s so them-oriented. We also do stuff like songwriting and recording. Lots of beat-making. Listening to music and kind of talking it through.

I find with those teenagers, because there’s music involved, they all want to come and experience it. Once that relationship builds, that’s when they start working on more emotional processing type goals. But that foundation of the relationship is so important. And that’s what music is like magic for.

What was your journey in becoming a Music Therapist?

FW: I did my undergrad in English with a minor in Political Science [at UVic] and I volunteered quite a bit in the community. I was just really wanting to connect my social justice desires with my need to connect with people. I didn’t see a career in not working with people being an option.

Ultimately, I picked music therapy and I’m really happy about it because I love connecting with people one-on-one and the therapeutic aspects. And I obviously loved being able to bring music into what I was doing. I never, never, never thought music was something I was going to do a career in. It was more of just something I loved doing.

But for me, it was more about the spaces that it could get you into, as far as, you know, here at a treatment center or working with kids or using music as a medium. That relationship connection was always my more important part.

IF: I grew up in Mission and I was about 16-years-old in the music scene and the Vancouver punk music scene. I found that it was this really strong form of connection for me and I continued to play music and play in bands.

And then finally after I graduated high school, I was invited by a foundation in Abbotsford called the Devon Clifford Music Foundation to do some rock camps with kids. I ended up working with young children and with teenagers and always incorporated music into my work. I found that it was so helpful to use that in just a baseline manner. Slowly, I found out more about music therapy and Stephen Williams, who’s the head of the department at Capilano, he really pushed me in the directions that were possible for me. It was just so exciting to see that there was a lot of stuff happening about building community through music and knowing that growing up, I had such a connection to it. It was such a pull to finding my true self and finding out how I was as a human. I wanted to be able to afford that to more people through those things, putting the music and the connection first.

What’s something that you wish more people knew about music therapy and what it can do?

IF: I wish more people knew that they didn’t have to be a musician to access music therapy. A lot of the time in groups here, when I bring out drums or bring out instruments and ask them to do active music, I find that a lot of the self-talk is like, Oh, I’m not a musician. I’m not all these sorts of things. I think that’s a barrier for people who might see the name “Music Therapy” and be interested and want to go. I wish that it was more out there that you don’t have to have any musical background at all in order to access these therapies and access this really, really powerful source of introspection.

There is also a lot of information and experience that goes into becoming an accredited music therapist, and I think that that’s something that’s not exposed very often.

FW: It’s so hard to speak to the power of it without experiencing it. But I guess I wish people just knew the potential of it as not just an “add-on” therapy. I wish people knew how potent and standalone it can be as a therapy.

IF: The overwhelming response is: I wish we had more of this. There’s so much want for this kind of therapy and want for this type of thing. Especially in addictions and in recovery, because there’s so many people who are really connected to their artistic sides as they come in. They would love to foster that as a person going through their recovery and put that into their future goals of what they want their life to look like and what they want as part of their lives.

Find out more about the music therapy programs we support and how to donate!