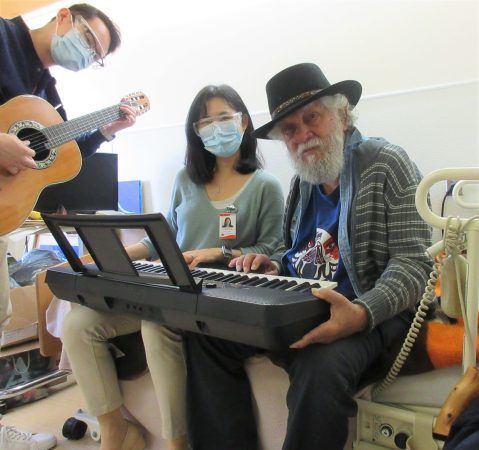 “These are some really tough times we live in. I haven’t been able to see my mother for a long time and when I did, I’m sorry I couldn’t stop crying. What you did today was remind me that she was a dancer and that where she is going, she won’t have to feel pain and dance freely. Thank you.”

This year, music therapy at Little Mountain Place provided a means to process the complicated thoughts and feelings associated with death, celebrating life and saying goodbye in the midst of a pandemic. Music Therapists Cameron and Julianne led music therapy programming by way of sing-along groups, a Chinese choir, and one-on-one bedside sessions for seniors with extra needs. They were also able to introduce new programs including a multi-instrument group and an evening lullaby group to decrease anxiety and encourage sleep for residents.

Social distancing, quarantine isolation, not being allowed to go out and not allowing visitors to come in, in addition to the physical, psychological and emotional changes caused by dementia, affected the mental health of not only the residents but also caregivers. Protocols restricted forms of physical, verbal and non-verbal communication which inhibited social courtesies such as shaking hands, dancing, hugging and having a conversation without masks. This has influenced the way one perceives how they belong in their environment. Common thoughts and feelings from residents include a sense of unfamiliarity in an unfamiliar environment and not feeling comfortable in one’s own home.

By offering familiar music in an unfamiliar environment, residents were inclined to feel more at home. This led to trusting music therapists as well as the people they were associated with. This was helpful in redirecting anxious thoughts, wandering behavior and acts of aggression towards a musical experience that could be positively stimulating and build positive social relationships. This was especially noticeable for residents who were required to be quarantined and isolated from the rest of the group since it appeared that negative thoughts elevated negative feelings. Having a positive human connection that develops into a trusting relationship can aid in processing these thoughts and feelings which may lead to an increase of quality of life.

Little Mountain Place is a residential care home in East Vancouver, currently providing support for 116 residents of diverse and complex mental health needs. Although residents come from diverse cultural backgrounds, a large percentage of the residents are of Asian descent. A 26-bed Special Care Unit called “The Garden Terrace” is specially designed to provide support for residents with behavioural symptoms related to Alzheimer’s disease and mental illness. The age of our residents goes from 34 to 101 years old and is composed of 60 Males, 55 Females and 1 Non-Binary.

“In previous years, our focus was to engage as many residents as possible by initiating large group programs with the goal of sensory stimulation, cultural empowerment, and to experience joy within the community. However, we realized that there are an increasing number of residents with complex and diverse health conditions such as schizophrenia, depression and suicidal ideation who may benefit more from the support offered in one-to-one or small group sessions. Similarly, residents who are receiving palliative care as well as their families may benefit more from the sensitivity, intimacy and emotional support that can be conducted with more finesse within the context of a one-to-one session.

[Thanks to Music Heals support] in 2021 we have been able to hire a new music therapist whose focus is to provide this much needed one-to-one attention and quality of care. For numerous residents, this personalized approach has been beneficial for redirecting negative and pervasive thoughts and experiencing moments of respite. We hope that in the future, rapport between music therapists and residents will continue to develop and that this will lead to an overall improvement of residents’ mood and trust in fellow care staff team members. There have been several instances where residents who were exhibiting aggressive behavior were able to be redirected with the visual and auditory stimulation of music and the presence of the music therapist whom they shared rapport with. For the remainder of the day this led to an improved mood, which contributed to less aggressive behavior towards care staff and increased compliance to care. This level of rapport, improvement of mood and overall trust in care staff may not have been possible without another music therapist.”

On Navigating The Ongoing COVID-19 Pandemic

“With pandemic restrictions, mental health needs have been amplified especially without the presence of entertainers, volunteers, friends and family. The value of music therapy, especially one-to-one and small group support has become even more apparent for one’s mental wellbeing.”

Your support will allow Little Mountain Place to sustain the increased programming from 2021 and allow the program to continue to cater to the needs of over 100 seniors in East Vancouver. 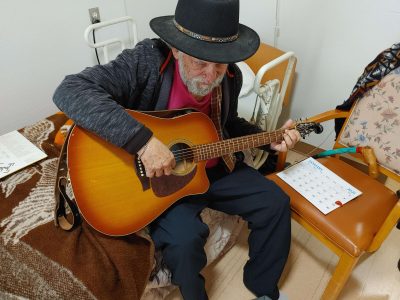 David Campbell, 85 years young, came to Little Mountain Place in May 2020. David was previously living alone, but because dementia had led to additional health complications including cognitive impairment, it was no longer safe for him to live without all-day professional care.

One of the reasons he was referred to music therapy was because David rarely accepted invitations to join leisure activities and when he did, in spite of his loveliness, he tended to avoid social contact and did not want to establish meaningful relationships with fellow residents. He spent the majority of his time alone and his mental wellbeing became a concern as he seemed to be searching for something to engage him, and yet would distance himself from activities and people.

“I had the pleasure of meeting David at a group singalong. My first impression was that he was indeed lovely, as he sat along the outskirts of the group where he respectfully listened, smiled and applauded. I noticed how David seemed especially engaged compared to how he appeared outside of music programs. As we were saying our goodbyes, David gestured to me to come closer to him where he said, “the way you do your thing and interact with the audience, you sure know how to work a crowd” and proceeded to compliment my guitar playing. Thanking him for his kind words, I proceeded to wonder aloud if he was speaking from the experience of a seasoned musician. David shifted his eyes downward, took a sigh and replied, “That part of my life is in the past, I’m grateful for it but…” then looking at me said “…now I think I’ll move on.” I extended an invitation for future music therapy sessions for which he agreed to. For the initial sessions that followed, David seemed engaged when I played music for him yet when I asked if we could play music together he would show hesitation, avoid eye contact, followed by an adamant “No, thank you”.

I was curious as to why the usually agreeable David who seemed so engaged with music would be so firm about not playing music together. I began researching more about David’s creative history and found that he has an extensive list of creative accomplishments. David is an award-winning author… poet, photographer, painter and storyteller and his largest body of work is music. When asked, David would say he was a “humble singer-songwriter who played mostly in Vancouver”, but with further investigation he has not only toured across the UK and Canada, but has made 29 albums of original songs, created short music videos on his own YouTube channel since 2007 and has collaborated with other music artists, one being Gordon Lightfoot…Knowing this, our collective determination as music therapy, care staff and the leisure team was to aid him in this journey of rediscovery together.

The first time he played the guitar [with us] seemed magical. It was like seeing David reunite with an old friend. The way he seemed so engrossed in playing the right notes, sliding his hands up and down the neck with ease.”

David now speaks openly and proudly of his musical career. Due to his dementia and the multiple barriers put on by pandemic restrictions, David’s journey to healing has not been linear. But with the help of Music Therapy, David has regained a sense of self-efficacy and enthusiastically participates in the group activities offered at the home. He now immediately accepts invitations with little to no hesitation, especially when singing and dancing is involved. 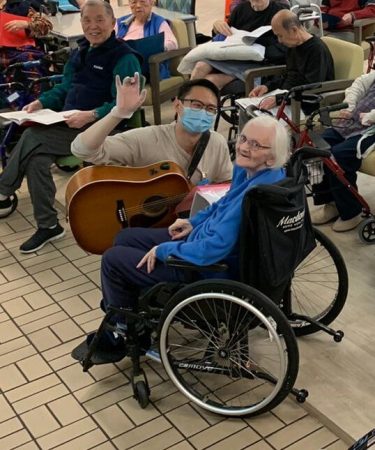 Cameron Yip is a recent graduate of the Bachelor of Music Therapy program of Capilano University. In the program he experienced working with elementary school students, palliative care centre clients and residents of the German Canadian Care Home where he completed the 1000-hour internship mostly working with residents with Dementia, Korsakoff’s, Parkinson’s, schizophrenia, and depression. He is currently providing music therapy services at the Little Mountain Place as a full-time music therapist.

Julianne Ryu is a recent graduate of the Bachelor of Music Therapy program of Capilano University. She has experienced working with refugees from war areas, children/adolescents with disabilities and mental health issues, and geriatric population of New Vista Care Society where she completed her internship. She is currently working with seniors at Little Mountain Place as a part-time music therapist and seeks to to have a client-centered, humanistic approach, especially through one-to-one sessions and small groups.